Today would be all about water.  Or visiting things relating to water.  One of the places which I know Mum wanted to see was the Queen Mary over in , so that was the first stop.  It gave us an opportunity to dive along , and see the nice older houses there.  We could picture an area decades ago when this was a sleepy little beach town, and the decent-sized homes which were built there.  This was a very pretty section to drive through.
The Queen Mary is a floating restaurant and luxury hotel now, so not a place for plebeians to mingle with the wealthier crust of society.  There were tours you could pay for in order to get a “haunted history” of the ship, or a presentation related to Princess Diana, but not something where you could just walk on board and look around.  Mum said she couldn’t expect it to look different than other cruise ships she’s been on. 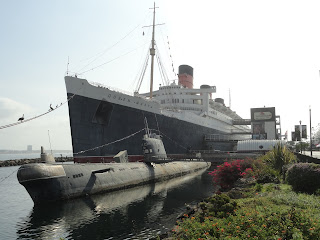 We also looked at the Soviet Scorpion Submarine docked there, a captured Cold War relic when it wandered into the harbor.  Tours of that were normally available, but it was currently “closed for maintenance.”  Not sure what maintenance was needing to be done, but due to the confining environment, I doubt Mum & Dad would’ve wanted to go inside.
We considered doing a harbor tour, and saw the sign for Catalina Express.  Further investigation revealed it was just a “water taxi” to ferry people across the bay, and it was no longer located here (contrary to the posted signs).  It wasn’t the primary destination for the day, but something we were checking for potential things later in the week. 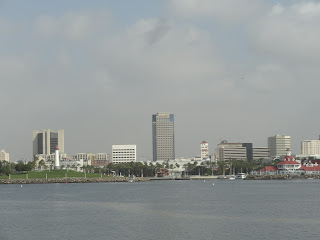 After a short trip west down Route 47 past the of , and over the very tall , we arrived at the Battleship Iowa.  This was one of the ships that arrived in for the surrender ceremony which concluded World War II (although the actual signing of the surrender document took place on the ).  While it saw service during the Korean War, it basically was a training ship, until it became a museum ship in 1990 and was parked here. 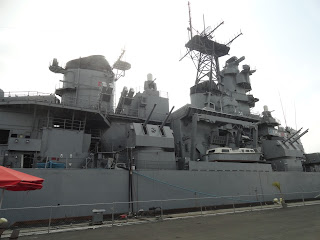 As we came aboard, the docents asked if any of our party had military service (as it would be announced over the loud-speaker), which I thought was a nice touch.  The tour of the was very well thought-out as a sections were marked so you could see the highlights of the vessel without doing a lot of backtracking (which was one thing which happened when we visited the Battleship Texas in 2013). 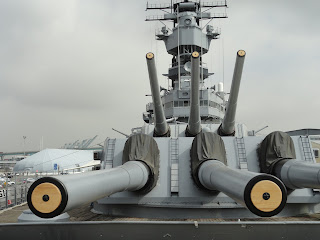 The brochure we were given had a dozen specific things to look for, listed in the order as the tour unfolded.  We started at the front of the ship, where the six of the nine 16-inch guns were, and then worked our way inside.  At various times we’d go up or down interior or exterior stairs following the prescribed route.  This allowed us to see areas which had been set aside with mementos of the ’s life, including pictures and some short films. 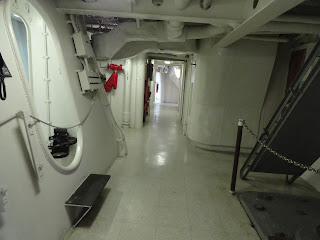 One amenity this battleship has which no other does was the inclusion of a bathtub.  This was installed prior to FDR’s 1943 meeting with Churchill and Stalin in Teheran.  Since the had the job of ferrying the President to this meeting, it needed to outfitted for his convenience.
We marked off the points of interest as we continued along the ship.  One I liked (based on the information provided by the brochure) was the Phalanx Weapon System, which was designed to deal “close-in” threats.  The barrel-shape and automated nature of the system earned it the nickname of “R2-D2” by the crew.  That would be something to see in the new trilogy, R2 goes Rambo on a bunch of Stormtroopers.  >grin< 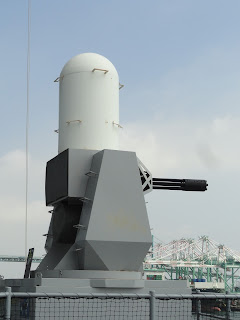 As we went up and down the stairs, with the narrow steps, I tried to imagine the personnel rushing around during an alert status, and imagined how many cadets tumbled down them before they learned to navigate them. 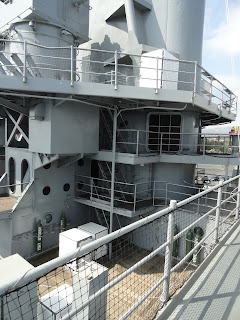 Mum commented because of the narrowness of the corridors, this was not the place for anyone with claustrophobia.  When looking at the sleeping bunks for the enlisted men, it really showed how space was at a premium here. 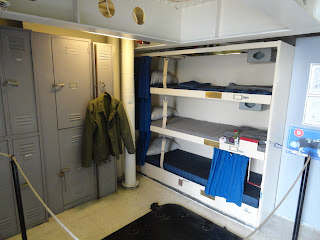 The tour of the was physically challenging, and could pose some issues to those not use to it.  This was a battleship after all, so obstructions in the hallways (to be able to close off sections), narrow staircases, and such were the norm.  Wear comfortable shoes before coming, and keep in mind this is not handicap accessible (although there may be some future modifications to change that).  I didn’t have any issues traversing the ship, but Mum and Dad had to slow down on the stairs, or sit occasionally. 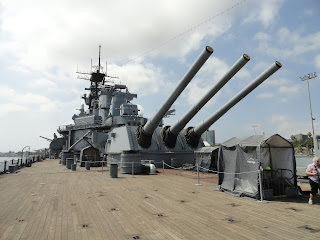 This was a great piece of history to be experience, and we were able to complete a thorough walk-through before lunch.  It wasn’t that hot or humid when we were there, so keep that factor in mind when making your journey there.

Dave McWhorter
The whole point of this blog is to upload stories about various places I've traveled.